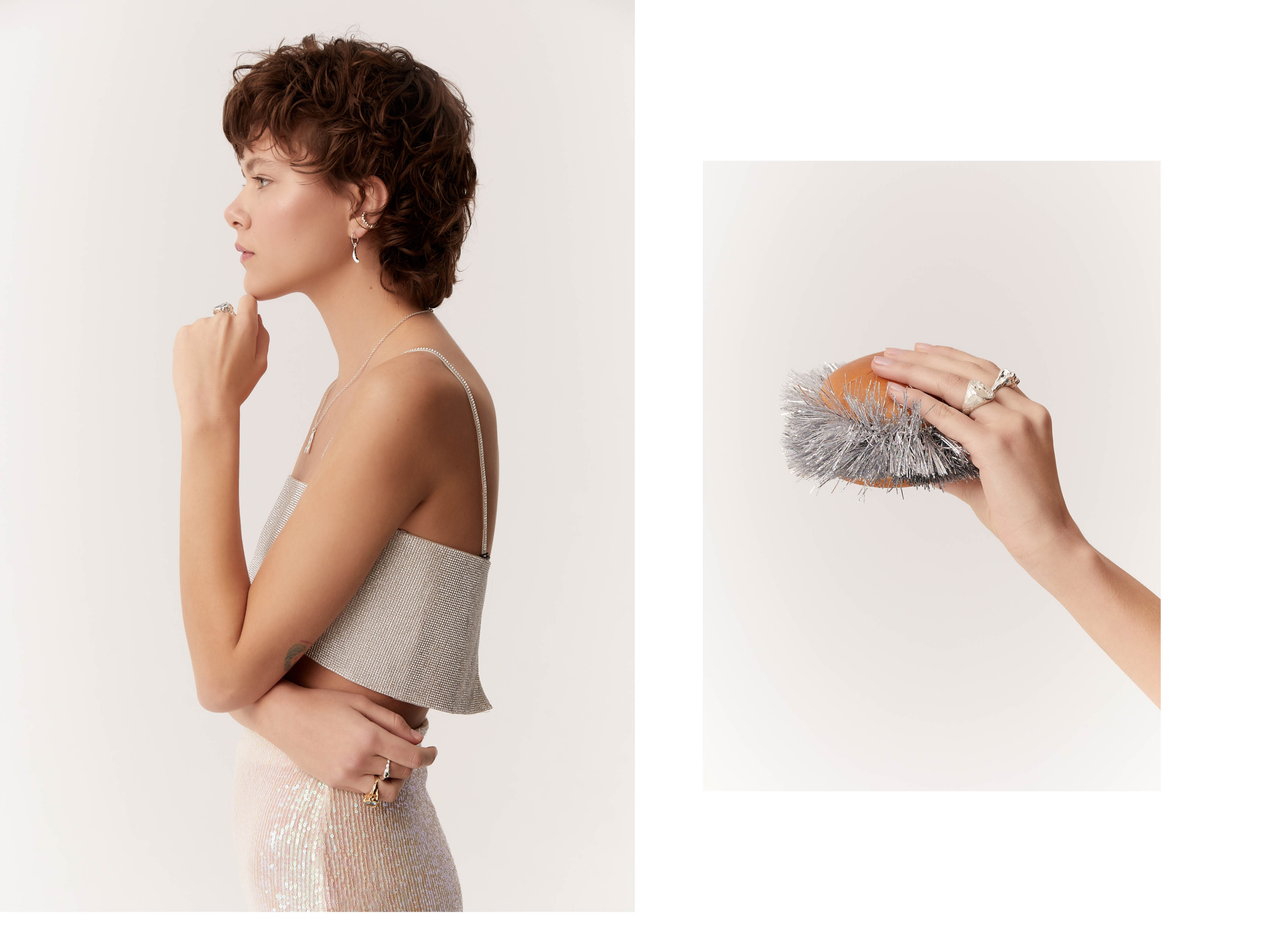 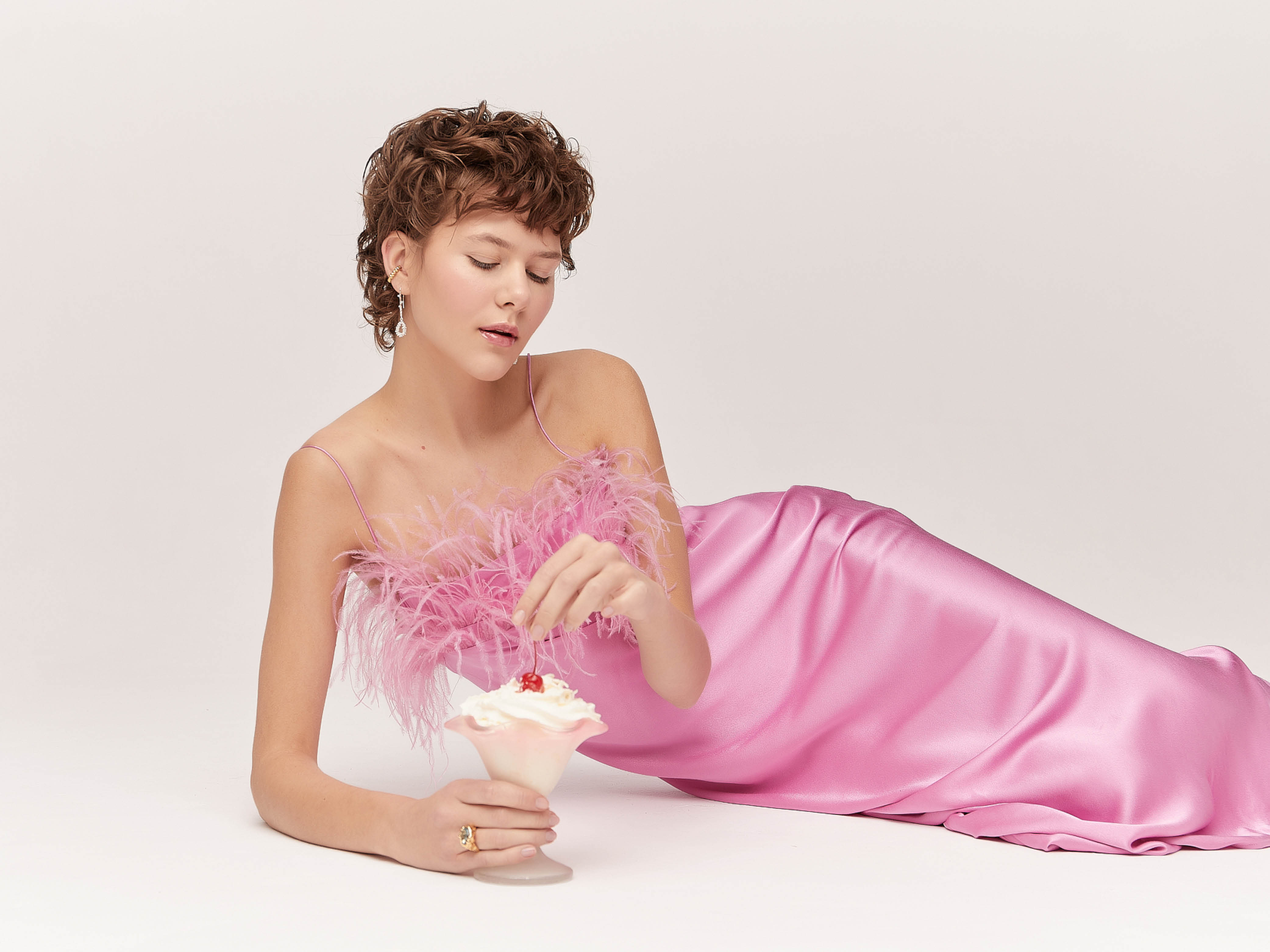 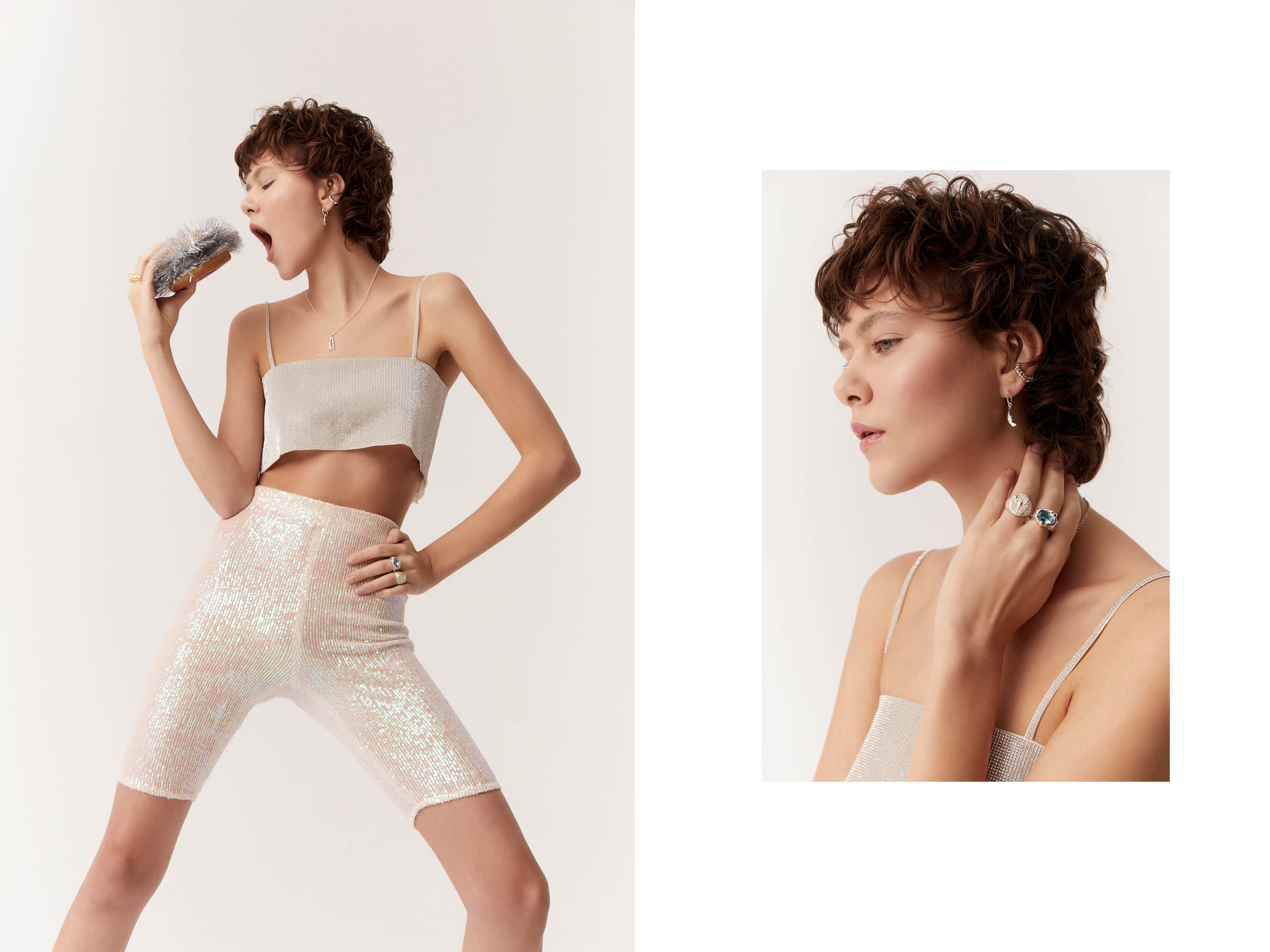 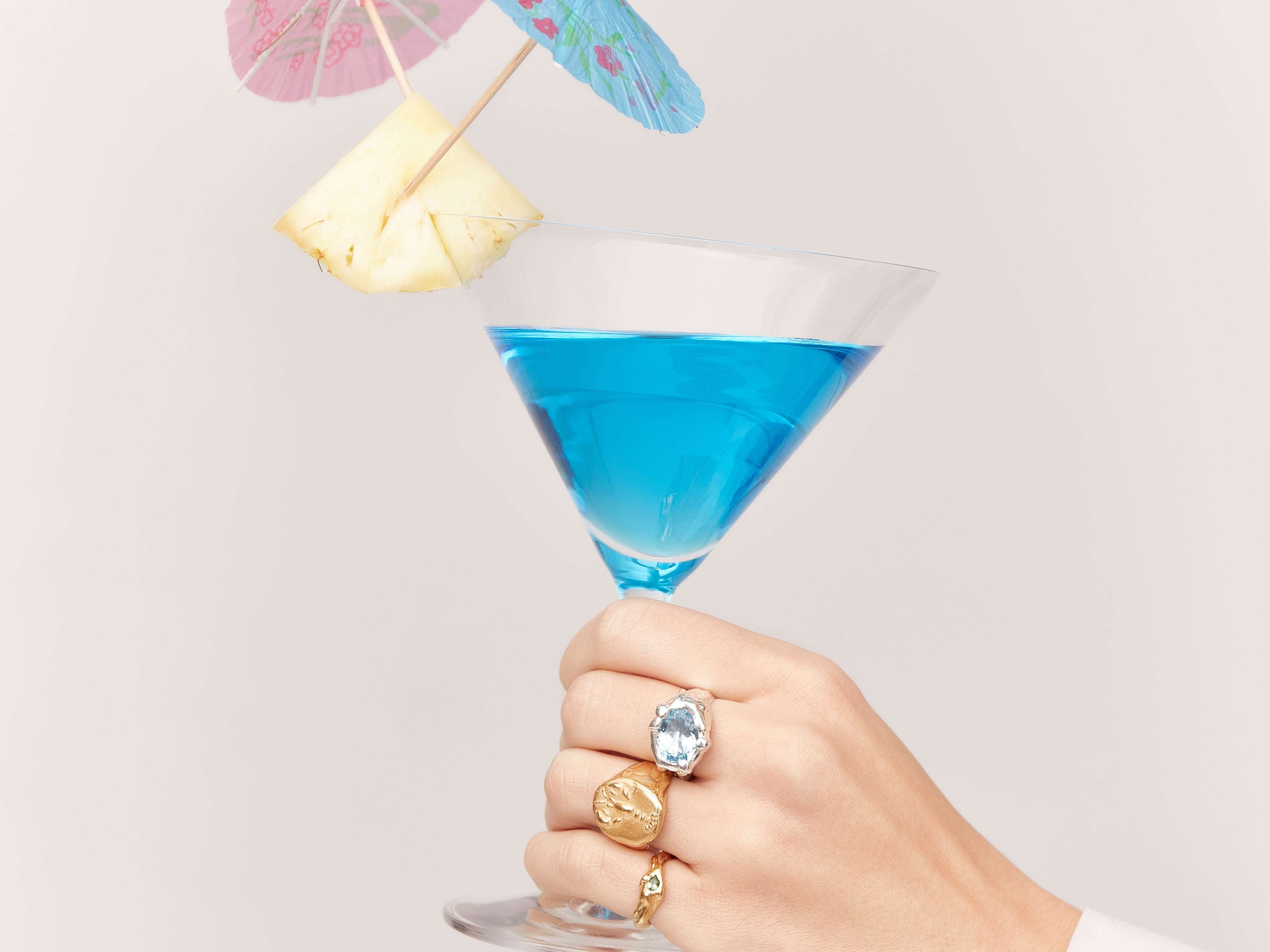 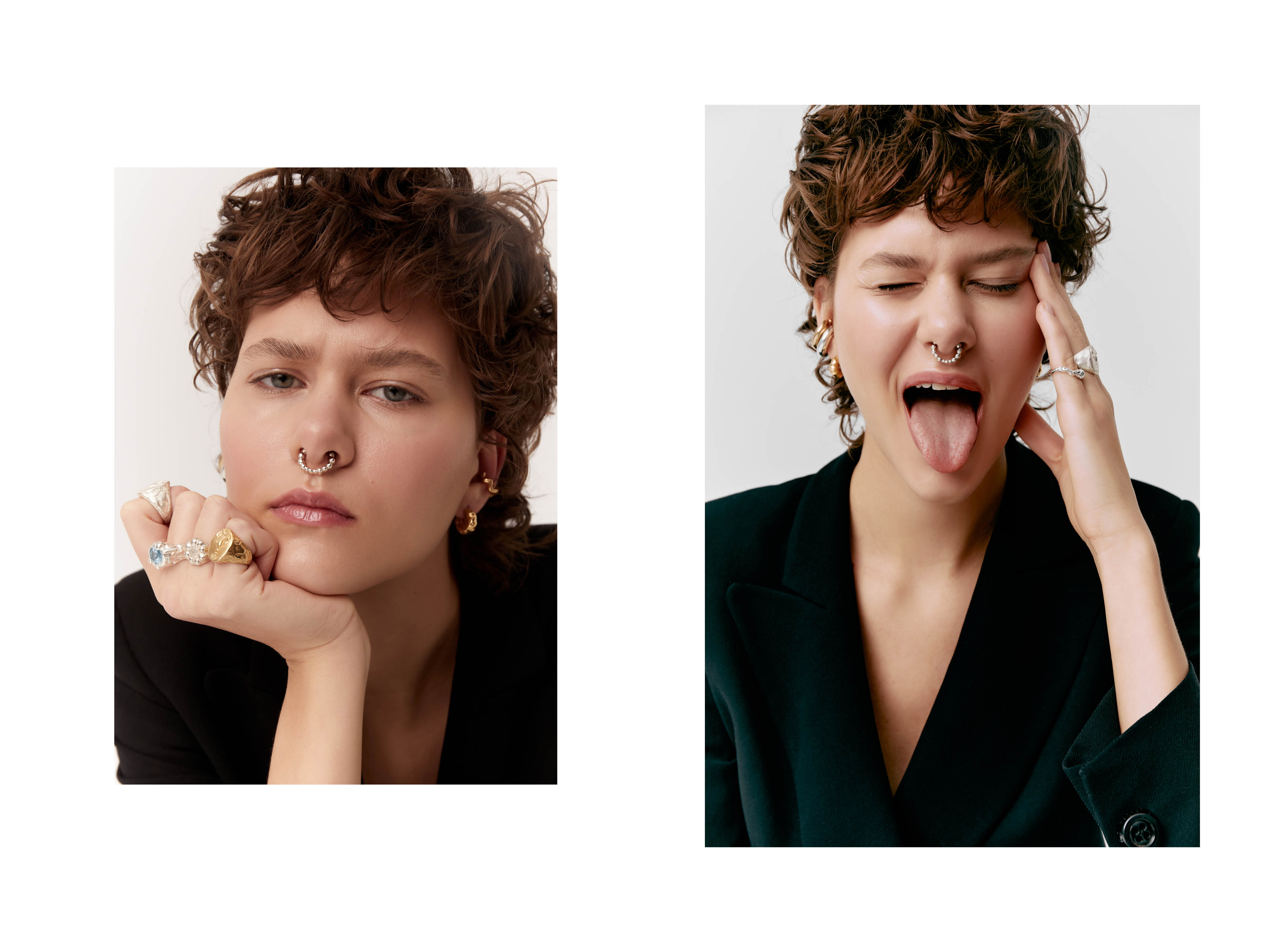 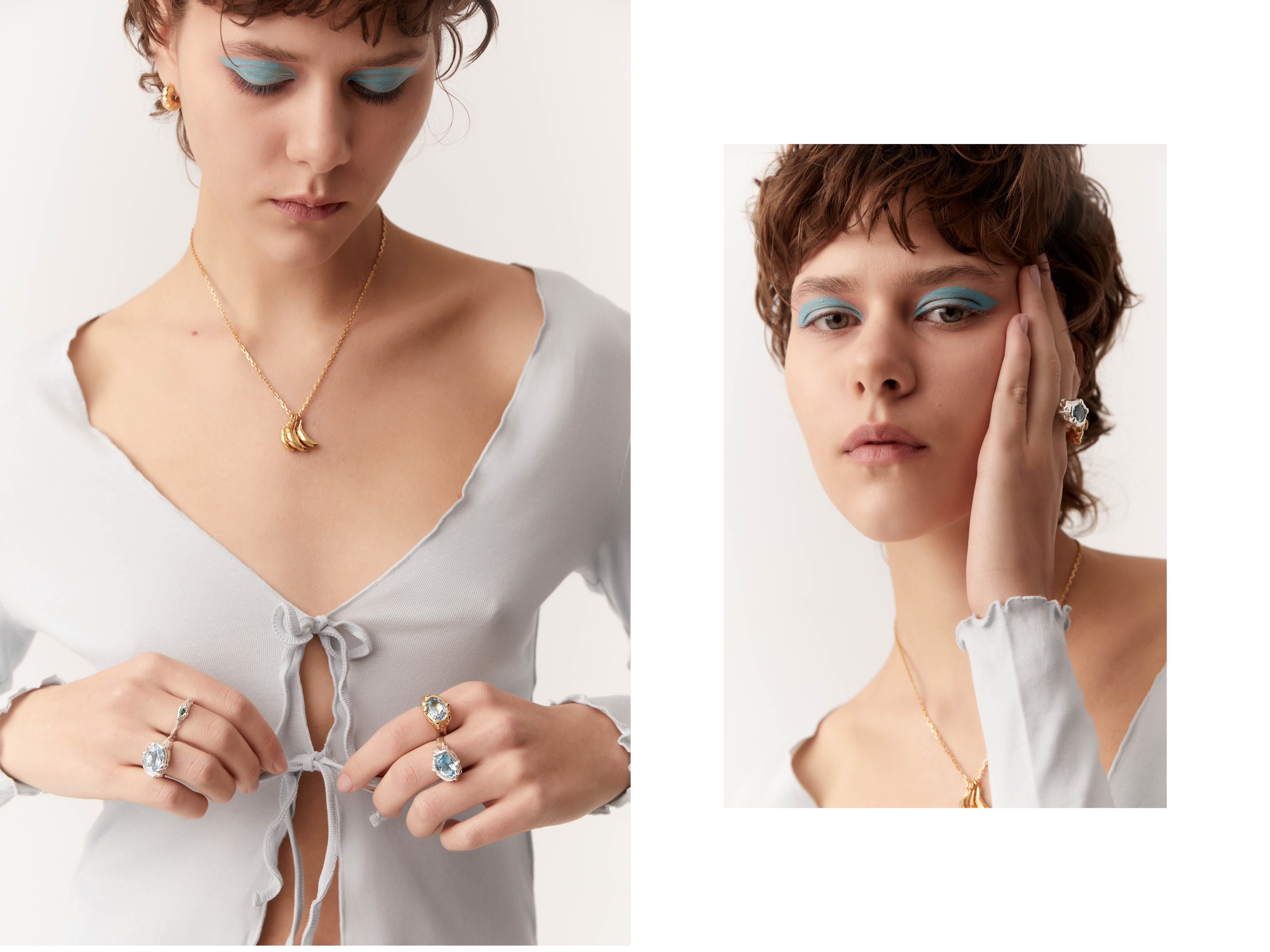 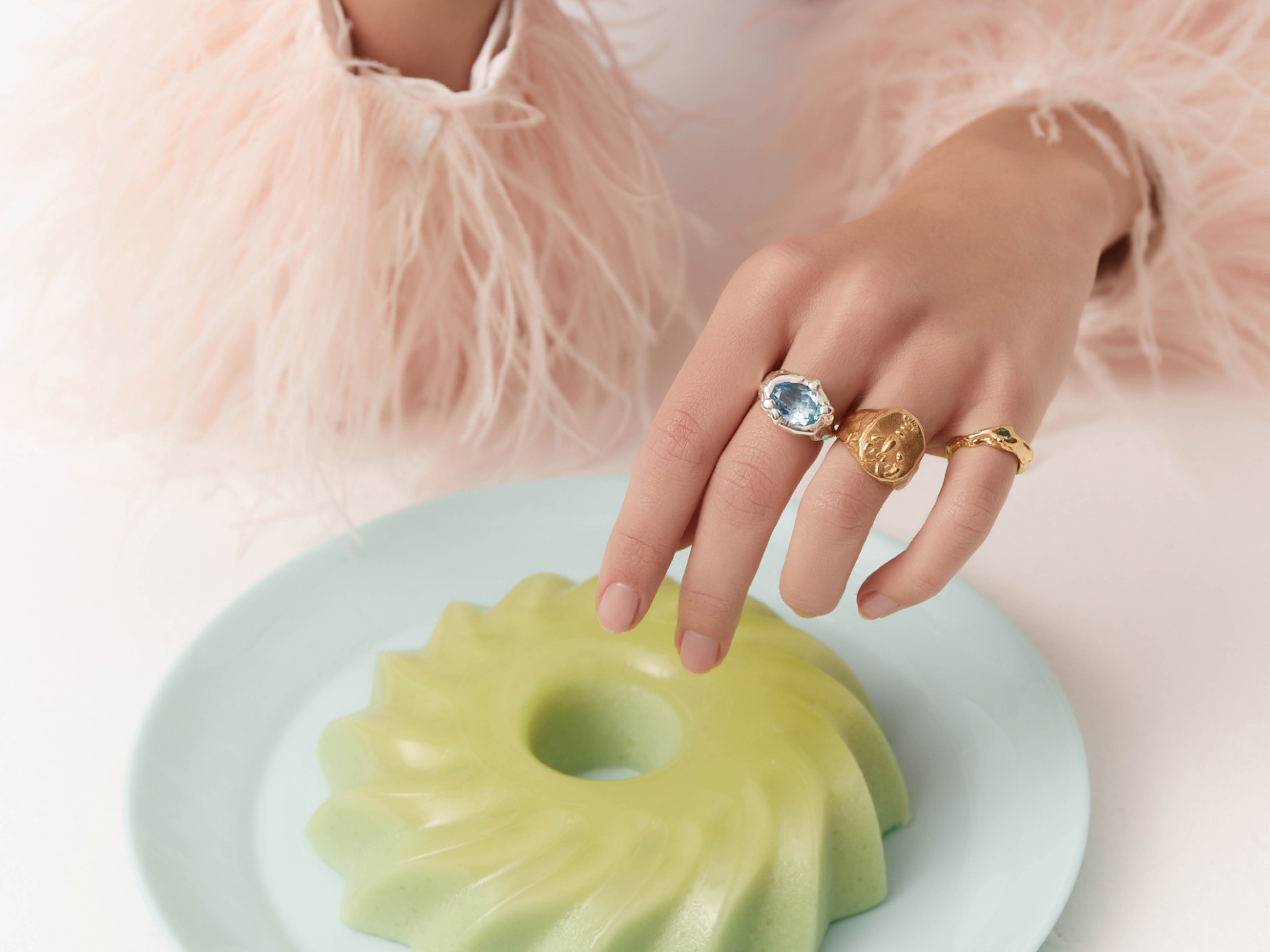 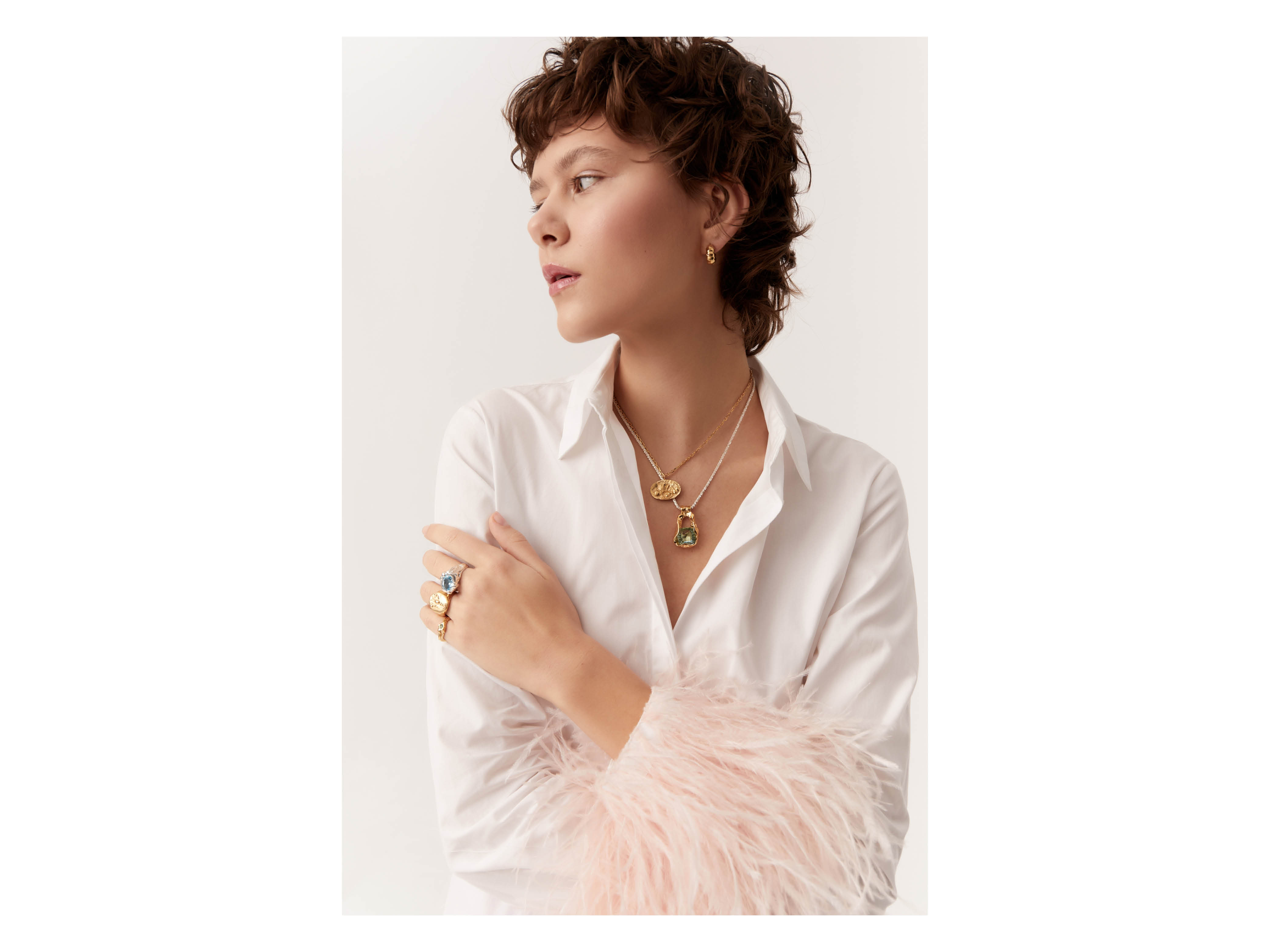 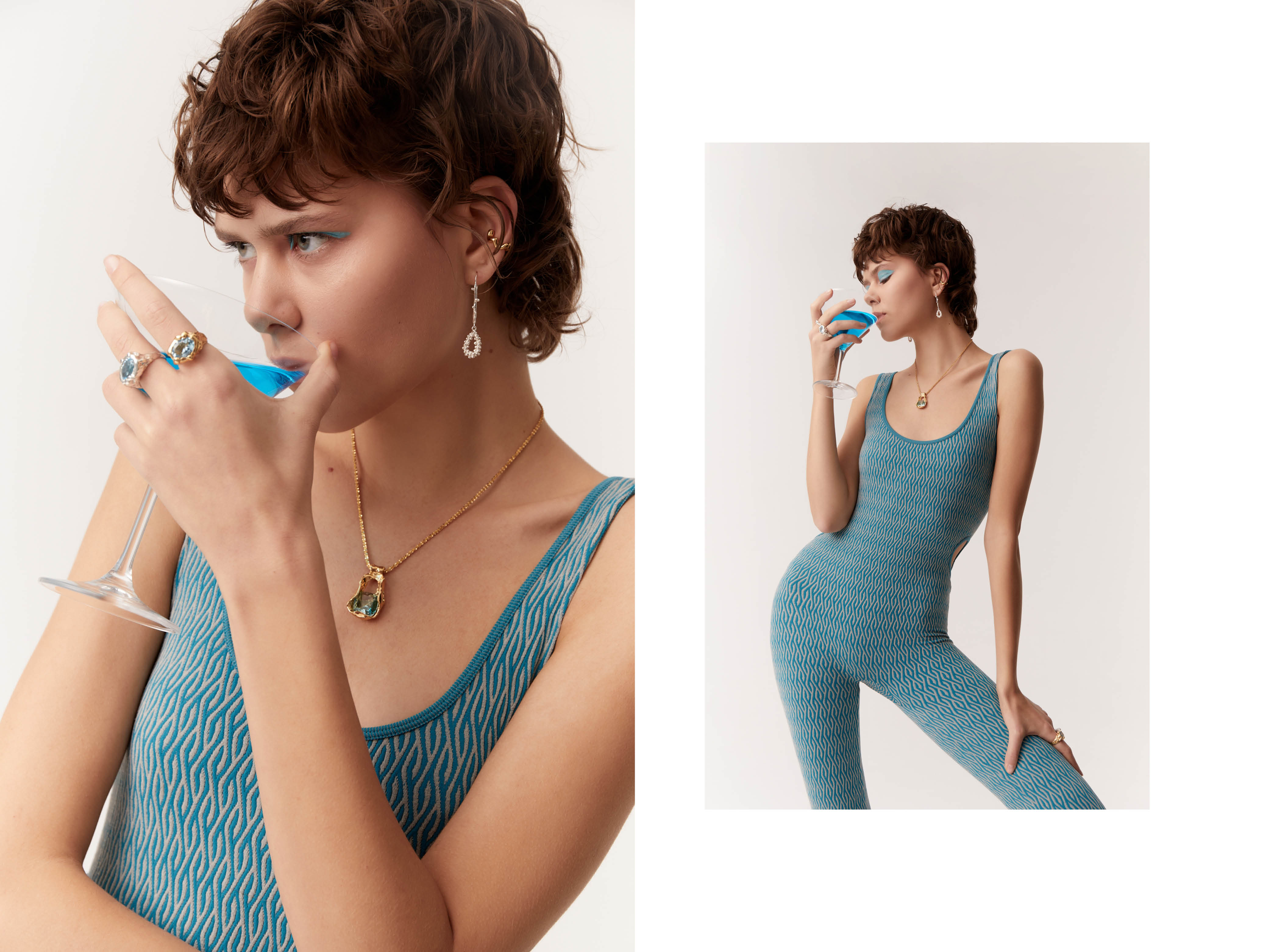 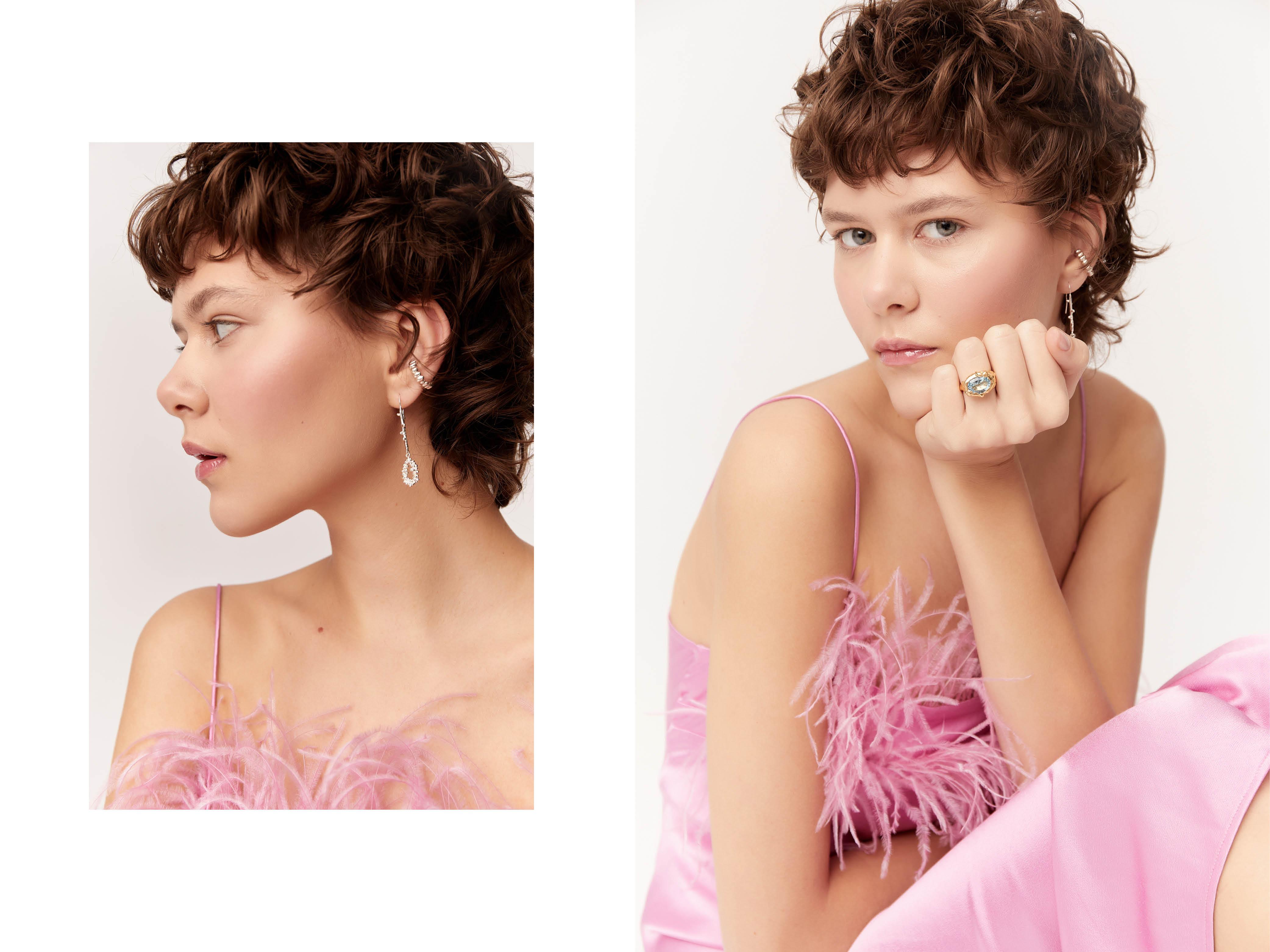 A ring spilling over the finger like cream, gauzy earrings and cutlery necklace. MAAR new autumn and winter 2021/2022 collection is a story about food - of the more and less literal kind. The designs are also inspired by the paintings of Paul Cézanne, glass works from Helle Mardahl Studio and organic forms taken from nature. Colour could not be missing from the MAAR collection either.
Agata Wojtczak and Antoni Bielawski, the designers and founders of
MAAR, reached for topazes that are as blue as swimming pool water and green tsavorites, which shimmer in irregularly structured rings. Necklaces, on the other hand, feature buttery jade, blue quartz,
orange carnelian and pearls.

The entire collection has been created in sterling silver and 24-carat gold-plated silver using traditional goldsmithing techniques.. -Everything begins with my visions and sketches. Later, Antoni makes a prototype from jewellery wax based on them. He carves it, melts it, grinds it, polishes it, and the result are wax carvings that are later cast in silver, says Agata

The new MAAR collection is dominated by necklaces with pendants that are attached to different types of chains. The pendants can also be combined and worn several at a time - for example, several banana pendants form a bunch. Rings are also a strong accent in the collection. - We always try to make our jewellery distinctive and original. This time we have reached for even larger, more massive forms. For example, the Sky Cream signet ring with topaz weighs a full ten grams of silver. It's quite a risky gamble, we hope there will be fans of it, says Antoni.

MAAR jewellery has actually been worn from the beginnings of the brand not only by girls, but also by guys. That is why this time the designers have created even more unisex proposals. The include a signet ring with a lobster, a string of
irregular pearls on a black thread or a banana earring.

The new collection is promoted by a campaign by Miłka Świtalska. Matylda Sokołowska appeared in front of lens of her camera. The choice of a model was not accidental. -We "met” Matylda through Instagram, because she was our customer. She has been wearing our necklace and earrings for a long time. We thought it could be great if the face of Maar would be a girl who somehow identifies with our aesthetics and appreciates what we create. Apart from that, we were obviously enthralled by her beauty," add Antoni and Agata.

No products matching your criteria have been found.

up
Shop is in view mode
View full version of the site
Sklep internetowy Shoper.pl